Does 5G Really Going To Revolutionize India In The Digital Era?

Foremost, have you ever wondered how we are able to access the internet services by just switching on mobile data in our mobile phone?
Mobile data creates a wireless connection by enabling devices to communicate through radio frequencies, it means that we are indirectly connecting to radio waves. The data downloaded via a mobile network is broadcasted to a cell tower. Cell tower can cover a broad geographical location and transmit data efficiently. The mobile data that we are using now is evolved through a number of different technologies called cellular Communication technology.
Cellular Communication technology is a form of Communal technology that enables the use of mobile phones.
Have ever doubted the terms 1G, 2G, 3G, 4G & 5G. What do they mean actually?
Here G stands for 'generation' and1, 2, 3, 4, 5 represents generation number.
These uses certain type of cellular technology like LTE (long term evolution), a tech developed to ease the transition from 3G to 4G and 5G uses new radio technology. As you can see as generations(1G,2G,3G,4G) evolving the services they are providing and its Technological applications in daily life are increasing and that's make the difference between generations.
There are two types of deployment models for 5G new radio network
Deployment model means it is a model that describes the environment where cloud applications and services can be installed in order to be available to consumers.
In simple terms standalone Deployment model means it completely uses 5G network to use this we need to purchase or maintain only 5G mobile phone.
Non-standalone Deployment model means it works with a 4G phone that has a 5G radio network. Since non-standalone 5G can work with 4G LTE (long term evolution) mobile network, it offers a Quick option to enter this market, and it is an intermediate step to completely turn our 4G phone to 5G just like how we moved from 3G to 4G.
Coming to the 5G spectrum auction that has been taken recently. Have you ever thought why the government auctioned 5G spectrum?
Firstly, we should understand what is spectrum?
Spectrum is a range of radio waves used for Communication purpose. It actually refers to the waves that surround us and can pass through anything and the spectrum auction is a process whereby government uses an auction system to sell the right to transmit signals over specific bands of the electro-magnetic spectrum i.e. licence to provide telecommunication services are awarded by an auction and the licence valid for a period of 20 years, after expiry of the licence the company would have to bid to renew the licence and this is the reason for new spectrum auction because the validity of the airwaves bought by companies is set to expire in 2021.
Companies That Involved:
Reliance Jio, Bharti Airtel, Vodafone idea and Adani enterprises
Are bid for 5G spectrum. 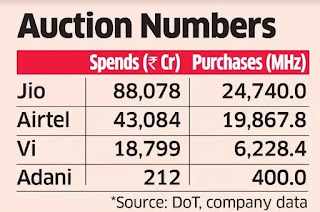 EMD stands for Earnest Money Deposit. It is taken by the organization to ensure that only serious bidders participate in the tender.
For the first time in India there is an offer for private tech companies that is they can set up parallel captive 5G networks not needing telecom carriers. It means tech giants like Infosys, TCS, Tech Mahindra can set up their own 5G networks only for their internal consumption.
What makes 5G revolutionary?
It is 10 times faster than 4G and will change the speed of downloads from hours to just seconds apart, improving our network speed, and it also allows connecting more number of devices. Most importantly, it has low Latency (time taken for data to travel from source to destination).
5G Leads to development in Artificial Intelligence, IOT, virtual reality etc.
What are your thoughts on 5G. Let me know down in the comments :)
Please do subscribe to our newsletter via mail to make sure you won't miss any of the future post written by one of the Vigyan Geeks like you.

Welcome to Vigyan Geeks. This is Jayanth Sakunaveeti, a student and science enthusiast from India. Exploring and sharing scientific content is my hobby. My life is going too complicated but no worry I explain science stuff in very simple and curious way to you.